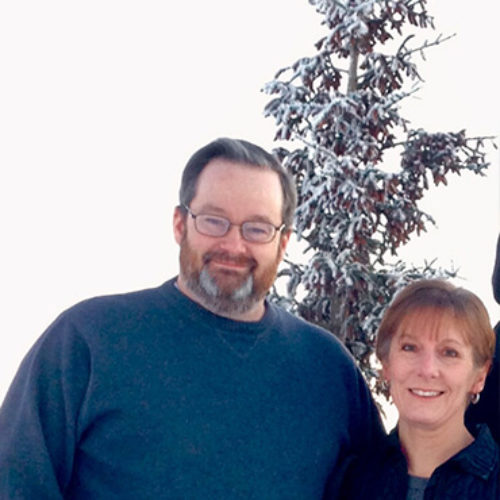 Partner with the Hadfields

Paul and Sara Hadfield joined the ABM team in 2010 after Paul graduated from Moody Bible Institute’s School of Missionary Aviation in 2008.

Born and raised in Yardley, PA, Paul earned a B.S. in Technology Education from Millersville University and an M.S. in Instructional Technology from West Chester University. He worked for twelve years as a public school Tech Ed teacher before training as a missionary pilot and subsequently serving with ABM.

Sara grew up in New York State. She earned a B.A. in German at Franklin and Marshall College and an M.A. in Teaching English as a Second Language from West Chester University. Paul and Sara married in 1991.

Paul and Sara were full-time career staff at Arctic Barnabas from 2010-2020. Paul managed the aviation team and also served as a pilot and aircraft mechanic. He led volunteer work teams to villages and encouraged pastors and missionaries face to face. Sara enjoyed serving ministry wives through ABM’s women’s ministry, extending hospitality in her home, and collaborating with teammates to host ABM’s annual Ministry Family Retreat.

In 2020, the Hadfields transitioned to associate status with ABM. They now live in Leola, PA, where Paul works in the aviation industry. Paul continues to support and advise aviation operations at ABM, and he and Sara look forward to connecting with teammates and ministry families during their trips to Alaska in the summers. They have four sons, a daughter, and a daughter-in-law.